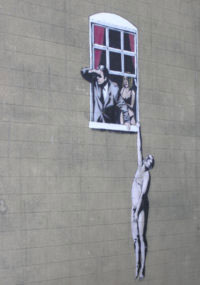 My Mum ( only by association to me)

Carey Grant Probalby the most famous and well known – Born Archibald Leach in Horfield, Bristol, Grant’s first role in theatre was working at the Bristol Hippodrome. He made over 70 films and became one of the best-loved actors of all time. He remained a regular visitor to Bristol, usually staying in the Royal Hotel, now known as the Bristol Marriott Royal

Billy Butlin Im sure we have all been to Butlins

Deal or No Deal – is filmed in Bristol

Shoestring Filmed on the waterfront with Trever Eve

Only Fools & Horse was filmed in Bristol. Nelson Mandela House exteriors were filmed at a housing estate in Bedminster and the episode ‘Heroes and Villains’ where Del and Rodney run down the street dressed as Batman and Robin was filmed in Broadmead

Edward Blanket – Yes he invented the blanket a long time ago

Richard Amerike – funded cabot and America was named after him

Banksey is from Yate. (Outskirts of Bristol) , Unfortunatly i dont have any of his paintings but if anyone wants to buy me one ….or two …… i will not refuse

Portishead ( the Group not the place)

Hugh laurie and Rowan atkinson both live in bristol

Justin Lee Collins Friday night is not the same without him

Vicky Pollard – based on that girl that everyone in Bristol knows from Hartcliffe
Casualty and Only fools and Horses & Skins were filmed in Bristol,
Bob Hope lived in Whitehall for a few years when he was a kid,
Mr. Think of a number Jonny Ball (Zoes dad) was born in Kingswood,
Good old Sophie Anderton, Wonderbra or Gossard cant remember
Robin Cousins the ice skating dude lived in Almondsbury, Got a medal at the Olympics years ago
Two birds from bananarama were from round here somewhere

and I believe ERNEST BEVIN..from when Labour used to be err..labour

Adam Hart Davis lives in Bishopston or did
WG Grace .. Cricketer ..turned out for Bemmy sometimes

NIPPER THE HMV DOG ..logo icon to this day theres a statue somewhere..

it. He is from Pensford. so techinically Bristol but possilby Somerset
He was the first Briton ever to have a song in the number one position on the US Billboard singles chart.
Just don’t ask me why it is ‘Mr’ Acker Bilk –

Father Xmas, Ghandi and God are all from Bristol…. I have met them all personaly and can vouch for them