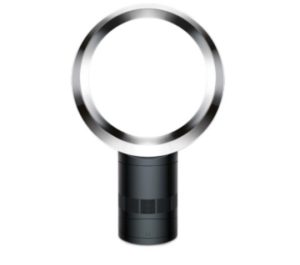 Guys I’m in love . Seriously I have found a keeper .
I have had the most amazing few nights in my bedroom recently .

Nope it’s not a man that I’m in love with . Its my new Dyson Fan the AM06 .
I love the hot weather but only when I’m on holiday and not working .
And I have been finding working in this heatwave unbearable . So despite the huge price I bought 2 Dyson fans after reading the reviews online .

I bought the mini Dyson AM06 and the bigger Pure Cool Dyson
The bigger Pure Cool Dyson was a big disappointment. At a shade over £400 it’s not worth it in my opinion it can do a lot of stuff like purify the air and tell me the air particles but it’s not doing what I needed which was to Cool Me Down .So it’s going back to Mr Dyson As my gran would say it’s all fur coat and no knickers .

But the smaller & cheaper Desktop version
Dyson AMO6 is amazing it’s so good I’ve named it Liam after Liam Neilson in Taken because it’s strong, silent, cool as ice, and can kick some serious ass.

Never has going to bed been so bloody enjoyable . No tossing and turning to keep cool . Just Liam by my side doing the job the job perfectly . Im in heaven .

And the bonus.
Well apart from being expensive initially Liam doesn’t steel the sheets , snore , or kick me out of bed and is pretty much the strong and silent stuff while being icy Cool .
And he comes with a remote control so i can make him work harder if I need him to .
Ladies if your dying in this heatwave that’s is apparently going on till the end of August I highly recommend buying a Dyson AMO6.
It’s light enough and easy to carry so you can easily pop it in the car and take with you on tour if your in a hotel with no air con

I’m in bed right now and I feel deliciously cool